Pointing a greater share of government funds towards the Green Belt could give a huge boost to people’s health and wellbeing – because so many people use its network of public footpaths, bridleways, cycle tracks, nature reserves and historic parks and gardens.

We’ve published some research on how government funding for the restoration of nature and cultural heritage are distributed, looking at where the schemes to plant trees, improve soil health, boost biodiversity and restore historic parks and buildings are sited.

Green Belt covers 12.5% of England and is the area around many of our towns and cities that provides the countryside next door for 30 million people. Yet despite its importance to so many people, it’s missing out on much of this key funding.

The research shows that just over a quarter (28%) of Green Belt farmland is covered by these sorts of government funding schemes, compared with 42% nationwide. Only 7% of all national spending is on Green Belt land, even though Green Belt contains 11% of all England’s farmland.

This means that valued spaces such as the parkland setting of Bentley Priory – the headquarters of the RAF during the Battle of Britain – are at risk of neglect or even loss.

Repeated studies show the countryside around our major towns and cities is increasingly valued by people. When we looked at one recent government study, we saw that four out of the ten most valued parks in England are on Green Belt land.

Those managing the land interviewed by CPRE confirmed the surge in the number of people visiting historic sites and beauty spots first reported during lockdown has continued to remain strong, with the Green Belt increasingly being used for walking and recreation.

Our new research, The countryside next door: why we need to invest in greener, healthier Green Belts, is the first to analyse where agri-environment funding has been spent. The resulting report demonstrates that the new schemes are the most important means by which the government’s own pledge to safeguard and improve the Green Belt can be met.

What we need to happen

Now we’re calling for a boost to funding for the countryside next door to our towns and cities, including those currently without a Green Belt. In addition to improving access to nature, the schemes should aim for broader public benefits such as strategically planting trees and hedgerows to prevent urban flooding.

‘The government needs to invest in the Green Belt on a major scale if ministers are to meet their political commitments to protecting and enhancing the countryside next door for 30 million people. The alternative to funding the Green Belt increases the risk of it being built on it instead. History repeatedly shows that when protected countryside is under-appreciated it’s at risk of being lost forever to development.

‘People deserve countryside on their doorstep where agriculture is less intensive, where there is space for nature that everyone can explore and enjoy and which is accessible to all. Green Belts have a crucial role in enhancing the sustainability of our cities. Green Belt land can provide essential ecological functions and recreational benefits which are fundamental to health and wellbeing. And this can go hand in hand with sustainable agricultural production and climate change mitigation.’

'Green Belt land can provide essential ecological functions and recreational benefits which are fundamental to health and wellbeing.'
Crispin Truman

The Green Belt includes over 6,000 miles of public rights of way, 34% of all England’s nature reserves and 22% of its historic parks and gardens. Our report shows that many social groups face particular challenges accessing these places, such as crossing busy roads, stiles, and a lack of reliable public transport.

Against a background of cuts to local government budgets for supporting parks and green spaces, funding from central government funded schemes has been crucial in maintaining historic parks around our towns and cities, and making them more accessible.

But we believe these funding schemes should also explicitly help socially and economically deprived communities, including people of colour and people with physical disabilities. There should also be more of an effort to make existing rights of way more accessible.

'Apart from the obvious barriers of stiles and locked gates, one way to improve accessibility is by attitude. People don’t always understand that we, in our wheelchairs or scooters, have the same rights as someone walking.'
Paula Brunt, Disabled Ramblers

‘… The benefits of being out in nature are both physical and mental – it’s proven to lower blood pressure and aid sleep, as well as the physical benefits. Whatever your ability, being out enjoying life with nature all around you just makes you feel good.

‘Apart from the obvious barriers of stiles and locked gates, one way to improve accessibility is by attitude. People don’t always understand that we, in our wheelchairs or scooters, have the same rights as someone walking. We often hear of members being told to get off a footpath as it’s just for walkers. If there was more funding through government subsidies to improve accessibility … this would be a great start and would also incentivise landowners to do more, as it was beneficial to them too.’ 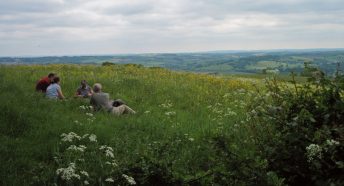